When extending a class, consider that you should be able to pass objects of the subclass in place of objects of the parent class without breaking the client code.

I've stated this principle informally; if you look it up on Wikipedia for instance, you will find formal descriptions such as

Let ϕ(x) be a property provable about objects x of type T. Then ϕ(y) should be true for objects y of type S where S is a sub-type of T.

All this, is a fancy way of saying that every subclass/derived class should be substitutable for their base/parent class. In other words, a subclass should not break the expectations (code contracts) set by its super-class.1

Since a square is a rectangle (mathematically speaking), we decide to implement Square as a subclass of Rectangle. We override setWidth and setHeight and we can reuse the implementation of getArea.

With this overriding of setWidth and setHeight -- to set both dimensions to the same value -- instances of Square remain mathematically valid squares.

The bad news is that making Square a subtype of Rectangle violates the Liskov Substitution Principle. Here is why:

LSP is violated because if we pass an object of Square to clientMethod (which we can since Square is a subtype of Rectangle) the assertion in clientMethod will fail. In other words, the expected behavior of super type is not maintained.

So what is the solution? Well, you can simply make two separate classes: Rectangle and Square. 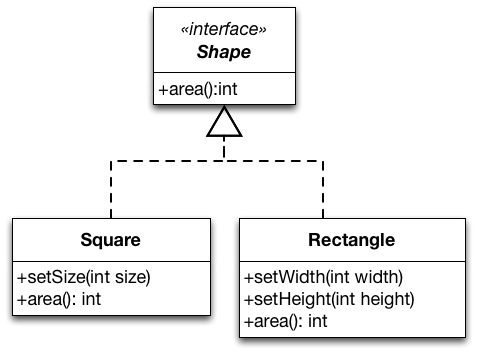 You could use composition to reuse the code in Rectangle: